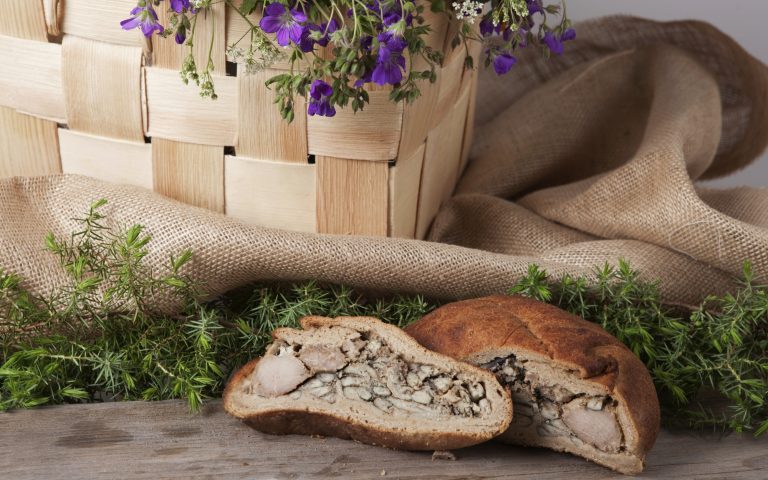 Food was prepared in the masonry oven

Over the years Finnish cuisine has been influenced by both eastern and western traditions. In the prehistoric age Finland had two main human settlements: one in the east near Lake Ladoga, and another in the west in the Turku-Kokemäki area. The regions had very little contact with each other, and therefore two independent cuisines were formed.

In the east, food was prepared in the oven. This was a result of the architecture of the houses in eastern Finland. Every house had a big masonry oven that was used for heating the house as well as for cooking. In the gentle heat of the oven different pies, pasties, casseroles and stews were cooked. In eastern Finnish homes fresh bread was baked every week, whereas in the west bread was baked in large quantities a couple of times a year. Instead of the oven, the western homes preferred cooking on an open fire with a cauldron. Seafood and soups were commonly cooked. Because of the different cooking styles, the east was called ‘oven food area’ and the west ’soup food area’.

Finns also used to live in what was primarily a subsistence economy. Food was prepared from the ingredients that were available in a given season. The necessity to cook from the available ingredients formed Finnish regional delicacies. The differences between different regions have diminished during the time but regions still cherish their own traditional dishes with great pride.

Natural ingredients are the basis

Simple and pure natural ingredients are essential in Savonian cuisine. Savonian food culture has been influenced by southern and northern traditions. Southern Savonia is part of east’s oven food area where many dishes are prepared by slowly cooking them in the masonry oven.

Many lakes, all of which provide various different types of fish, surround the Savonia region. One of these fish is the Vendace, which is a local delicacy that can be enjoyed fried, cooked or as a filling of a pasty.

Savonia is known for its special pasties – kukko and lörtsy. Kukko is a pie baked in a thick rye bread crust. The most common filling is fish. Then the pie is called kalakukko. The Savonian kalakukko has obtained Traditional Speciality Guaranteed (TSG) status, other examples of which include Herefordshire Cider, Gorgonzola cheese and Champagne.

Lörtsy is a thin, half-moon shaped pastry that comes with variety of fillings. Most popular fillings are savoury meat filling and sweet apple mush filling. Best lörtsys can be bought from the local market.

Try out the local speciality kalakukko. Kalakukko is a hearty meal that is best enjoyed with a brush of butter on top and a glass of cold milk.

Flavours of Finland by ExpediaFI

...
We use cookies on our website to give you the most relevant experience by remembering your preferences and repeat visits. By clicking “Accept All”, you consent to the use of ALL the cookies. However, you may visit "Cookie Settings" to provide a controlled consent.
Cookie SettingsAcceptAccept All
Manage consent

This website uses cookies to improve your experience while you navigate through the website. Out of these, the cookies that are categorized as necessary are stored on your browser as they are essential for the working of basic functionalities of the website. We also use third-party cookies that help us analyze and understand how you use this website. These cookies will be stored in your browser only with your consent. You also have the option to opt-out of these cookies. But opting out of some of these cookies may affect your browsing experience.

Necessary Always Enabled
Necessary cookies are absolutely essential for the website to function properly. These cookies ensure basic functionalities and security features of the website, anonymously.
Analytics
Analytical cookies are used to understand how visitors interact with the website. These cookies help provide information on metrics the number of visitors, bounce rate, traffic source, etc.
Advertisement
Advertisement cookies are used to provide visitors with relevant ads and marketing campaigns. These cookies track visitors across websites and collect information to provide customized ads.
Others
Other uncategorized cookies are those that are being analyzed and have not been classified into a category as yet.
SAVE & ACCEPT
Powered by