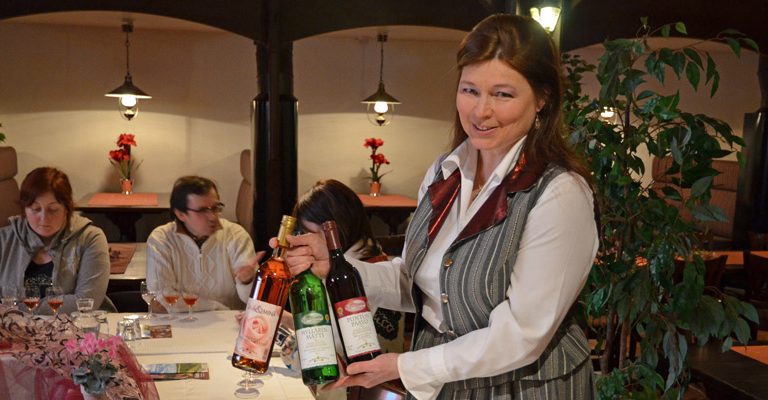 Sirpa Villanen, operating the Ollinmäki Wine Farm with her family, has lived in the Mikkeli region all her life. Once her home was in Mikkeli; now it is in Anttola. Her present home and workplace is Sirpa’s childhood home. “I wasn’t smart enough to go elsewhere,” laughs Sirpa. The homestead now operates the Ollinmäki Wine Farm.

Ollinmäki Wine Farm was established in 1995, when amendments to legislation governing alcoholic beverages enabled the production and sale of wine farm wines. The Villanen’s, who up until then had operated a juice-making business, then decided to start to make wines.

A wine cellar was built in the cowshed of Sirpa’s farm and the couple travelled to Central Europe to learn the art of making berry wines. “My homestead had had orchards since the 1920s and was growing berries and apples. As we were already producing juice, starting to make wine was a logical step,” says Sirpa.

Sirpa and her husband Jukka, who back then was employed as a church verger, ended up in juice production by accident. “Back then I was working for the West Savonia newspaper and we shared a courtyard with a juice processing plant. From time to time I would fetch juice from there and when I learned about the company’s intention to move, I announced that I would be willing to take it on,” said Sirpa, describing the first steps of her entrepreneurship.

In the early days of the couple’s business, Sirpa continued her employment with the newspaper. Her husband built the wine farm and looked after their two daughters at the same time. “And then, when I injured my knee and was no longer able to drive to work, I thought that perhaps now was the time to give the farm my full-time attention,” says Sirpa with a smile.

Currently Ollinmäki employs the whole family. The husband is responsible for the wine production and both daughters are involved in the business.

You and I, sitting in a tree

The product names of the Ollinmäki Wine Farm are a fun surprise: Myllärin Matti, Juortanan Jussi, Puntun Paavo and Hentun Liisa (characters from a Finnish nursery rhyme). The story behinds these names are extraordinary. “Thinking up the names was a long-winded project. We even considered using the names of cows and French farms,” says Sirpa.

“And then I found my mother’s copy of Kanteletar Finnish folk poetry collection.”  In this collection of poetry, Sirpa found the nursery rhyme in question, which contained the names of all the above characters, so decided to use them.

In addition to the wines, Ollinmäki Wine Farm also produces liqueurs, ciders, and two brands of sparkling wines called Ruhtinattar and Ruhtinas (Princess and Prince). These names refer to the Russian princely Demidoff family that lived at Anttolanhof Manor at the beginning of the 20th century.

Some people have thought that the Ruhtinatar name stands for the mistress of Ollinmäe. Apparently Sirpa does not mind that all. “Our cider has been named Sirpakka,” says Sirpa with an air of mystery.

The Ollinmäki wines with their national romantic names have been made from apples, grapes, lingonberries and black crowberries. The grapes are bought from the adjacent farm, the apples originate from the own orchard, and the wild berries are delivered by local foragers.

As Sirpa says, berry wines are suited for the Finnish palette: “Finnish cuisine goes well with berry wines. For example, apple-based wine is a good match for pork dishes”.

Surprisingly the base of the sweet lingonberry wine is birch sap. “It gives the wine a rounded and soft taste. Birch sap is also good for your health,” says Sirpa.

Another surprise among the selection of drinks is the moonshine- based tar-flavoured schnapps. This dispels any final doubts people may have about moonshine. The liqueurs contain spruce sprouts, a Finnish ingredient that has recently gained high popularity.

Customers visit the wine farm all year round, arriving on both pre-arranged guided tours and as ex-tempore travellers. During the summer, people turn off the main highway to pop in and purchase beverages as well as tar-moonshine schnapps.

The farm also has a venue for celebrations, an extension to the wine cellar that has room for 100 people and can be rented for special occasions; the summer terrace has hosted a wedding or two. The tower bar, on the other hand, is well suited to smaller groups for the sampling of the finest wines. Bed & Breakfast accommodation is also available at Ollinmäe.

Foreigners, Russians in particular, form a significant customer group at Ollinmäe. “Russians like sweet berry wines. The Spanish, in turn, usually take a shine to Puntun Paavo due to the birch sap used in it instead of water,” says Sirpa.

Foreigners are genuinely interested in the berries that have been used for wines and, more than once, Sirpa has taken her visitors to the neighbouring vineyard to see real grapes.

What about the wine farmer herself: does she still like to drink wine? “I like the sparkling wine,” says Sirpa with a smile.

...
We use cookies on our website to give you the most relevant experience by remembering your preferences and repeat visits. By clicking “Accept All”, you consent to the use of ALL the cookies. However, you may visit "Cookie Settings" to provide a controlled consent.
Cookie SettingsAcceptAccept All
Manage consent

This website uses cookies to improve your experience while you navigate through the website. Out of these, the cookies that are categorized as necessary are stored on your browser as they are essential for the working of basic functionalities of the website. We also use third-party cookies that help us analyze and understand how you use this website. These cookies will be stored in your browser only with your consent. You also have the option to opt-out of these cookies. But opting out of some of these cookies may affect your browsing experience.

Necessary Always Enabled
Necessary cookies are absolutely essential for the website to function properly. These cookies ensure basic functionalities and security features of the website, anonymously.
Analytics
Analytical cookies are used to understand how visitors interact with the website. These cookies help provide information on metrics the number of visitors, bounce rate, traffic source, etc.
Advertisement
Advertisement cookies are used to provide visitors with relevant ads and marketing campaigns. These cookies track visitors across websites and collect information to provide customized ads.
Others
Other uncategorized cookies are those that are being analyzed and have not been classified into a category as yet.
SAVE & ACCEPT
Powered by